What Is RTD Sensor And How Does It Work?

You are here: Home1 / News2 / Uncategorised3 / What Is RTD Sensor And How Does It Work? Do you want to know what an RTD temperature sensor is, how it works and how to test it? Then you are in the right spot, we have answered all those questions and many more for you.

What is an RTD temperature sensor?

An RTD stands for “Resistance Temperature Detector” and it is a sensor whose resistance changes when its temperature changes and it is used to measure temperature. The RTD’s resistance increases linearly when the temperature increases. Many RTDs are called wire wound. They consist of fine wire wrapped around a glass or ceramic core. The wire is made of platinum. Another interesting thing is that the RTD elements are normally housed in a protective probe to protect them from the environment they are immersed in and to make them more robust.

Inexpensive RTDs are called thin film RTDs. They consist of a base ceramic with a fine Platinum track deposited on it.

How does a resistance thermometer work?

The electrical resistance is measured in Ohms. The resistance value can then be converted into temperature based on the characteristics of the element. Usually, the response time for an RTD is between 0.5 and 5 seconds. This makes them very suitable for many applications.

How to test RTD temperature sensor?

To test your RTD sensor set your multimeter to a resistance mode. After that, check the readings across the terminals of the RTD. At room temperature (around 20°C) the reading should be around 110 ohms. Keep in mind that the reading value may be different, which depends on the room temperature.

Finally, place the RTD temperature sensor in ice water. Then, after a couple of minutes check the readings again. Now, you should get a lower number than the room temperature reading. That number should be around 100 ohms.

What is the difference between RTD and thermocouple?

There are a number of differences between thermocouples and RTD sensors. Below we have outlined the main ones.

Why does an RTD have 3 wires?

As we mentioned earlier, most RTDs have two wires, however, others are made with three. This type of construction is used mostly in industrial applications where the third wire provides a method for removing the lead wire resistance from the sensor measurement.

Does an RTD need a power supply? Resistance Temperature Detectors do require a power source to operate.

Why platinum is used in RTD?

As we mentioned earlier in the article, platinum is used in RTD sensors due to its stability and it provides repeatable and measurable results and has a broad temperature range. Moreover, platinum provides very low fluctuations in temperature readings, resulting in overall precision and stability of temperature measurement. 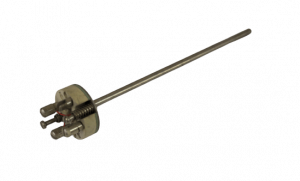 If you want to order an RTD sensor or you are unsure exactly what you need, get in touch and we can help you.

Infographic – What is an RTD sensor and how does it work?

What Is A Thermocouple And How Does It Work?

What Is A Temperature Sensor & What Types Are There?
Scroll to top

This site uses cookies. By continuing to browse the site, you are agreeing to our use of cookies.

We may request cookies to be set on your device. We use cookies to let us know when you visit our websites, how you interact with us, to enrich your user experience, and to customize your relationship with our website.

Click on the different category headings to find out more. You can also change some of your preferences. Note that blocking some types of cookies may impact your experience on our websites and the services we are able to offer.

These cookies are strictly necessary to provide you with services available through our website and to use some of its features.

Because these cookies are strictly necessary to deliver the website, refusing them will have impact how our site functions. You always can block or delete cookies by changing your browser settings and force blocking all cookies on this website. But this will always prompt you to accept/refuse cookies when revisiting our site.

We fully respect if you want to refuse cookies but to avoid asking you again and again kindly allow us to store a cookie for that. You are free to opt out any time or opt in for other cookies to get a better experience. If you refuse cookies we will remove all set cookies in our domain.

We provide you with a list of stored cookies on your computer in our domain so you can check what we stored. Due to security reasons we are not able to show or modify cookies from other domains. You can check these in your browser security settings.

We also use different external services like Google Webfonts, Google Maps, and external Video providers. Since these providers may collect personal data like your IP address we allow you to block them here. Please be aware that this might heavily reduce the functionality and appearance of our site. Changes will take effect once you reload the page.