What Is A Thermocouple And How Does It Work?

You are here: Home1 / News2 / Uncategorised3 / What Is A Thermocouple And How Does It Work?

Do you want to know what a thermocouple is, how it works, where it is used, as well as the different types? Then you are in the right spot, we have answered all those questions and many more for you.

What is a thermocouple?

Said in another way, a thermocouple is a very simple, robust and inexpensive sensor for temperature measurement which is used in a variety of processes for measuring temperature.

How does a thermocouple work?

A thermocouple is a pair of dissimilar conductors that give an EMF when they pass through a temperature gradient. Because there are different metals they have different conduction rates creating a small but useful measure of EMF. The EMF depends on the alloys used and the temperature difference.

What is a thermocouple used for?

If you are wondering what is the use of a thermocouple, well, they are pretty versatile and are used in a vast array of applications to measure temperature due to their cost-effectiveness, robustness and capabilities. They are used in applications such as home appliances, food processing, plane engines, furnace monitoring, automotive sensors and many more.

Other reasons why thermocouples are so widely used are that they have a small size, can measure high temperatures, have a fast response and are capable of handling high vibrations very well.

Molten metal temperature measurement is very difficult, because of the severe conditions and very high temperature. Therefore, for that purpose only Type N and K Base Metal and Types S, R and B Platinum thermocouples can be used.

Specifically for the food industry, thermocouples can be used in a large array of applications. Some of the most popular sensors and applications include Penetration probes, Clean-in-place sensors, Hotplate control, Food chain monitoring, and Oven control.

When choosing a thermocouple for a furnace, you need to keep in mind the conductions. Therefore, when you want to select the right thermocouple for your furnace, please do not forget to consider the following conditions:

What are the different types of thermocouples?

There are eight common types of thermocouples, each with unique properties. They are B, E, J, N, K, R, T, and S type. Type B thermocouple comprises of Platinum (30% Rhodium) and Platinum (6% Rhodium) alloy. It has a high-temperature range between 1370 to 1700 °C, making it suitable for applications with very high temperatures like glass production.

Type E thermocouple comprises Chromel and Constantan alloys. It has a lower temperature range than type B (0 to 870 °C). They can be used in an inert environment, but they need to be protected against a sulphurous environment. Type E thermocouples are mostly used in power plants.

Type J thermocouple comprises of Iron and Constantan. It has a low-temperature range of 0 to 760 °C. This type of thermocouple is used primarily in inert and vacuum environments. One of the most common applications is Injection moulding.

Type K thermocouple is made of Chromel and Alumel. It has a temperature range between 95 and 1260 °C. It is best suited for neutral or oxidising environments and is mostly used in refineries.

Type R thermocouples comprise of a combination of Platinum (13% Rhodium) and Platinum and have a temperature range between 870 to 1450 °C. Due to the fact that they are very stable and accurate, they are used in Sulphur recovery units.

Type S thermocouples are a mixture of Platinum (10% Rhodium) and Platinum. They have a higher temperature range between 980 to 1450 °C making them perfect for applications involving high temperatures.

Last but not least, type T thermocouple comprises Copper and Constantan. The temperature range it has is between -200 to 370°C. It is suitable for inert and vacuum environments, making it perfect to be used in cryogenics and food production.

What happens if a thermocouple fails?

What problems you can have with thermocouples?

You always need to think of cold junction compensation. This is because the cold junction is usually inside an instrument, an allowance must be made because all thermocouples lookup tables are based on cold junctions on 0 degrees centigrade, which is rarely the case in practice. Most instruments will deal with this for you but you can create an ice bath for use in the most demanding calibrations.

Thermocouple drift occurs because the materials get used at the upper end of their practical range which causes material deterioration and that affects the output. Thermocouple replacement is the only solution to that problem.

For high temperatures, rare metals are used which can become very expensive.

What are the advantages of using thermocouples?

Thermocouples are very simple, rugged temperature sensors which are easy and simple to manufacture and usually are not expensive. Moreover, they are useful over a wide array of temperature ranges and can be inserted in tough locations such as nuclear reactors, body cavities and more. In addition, thermocouples can be made with fine wires to measure the temperature of very small objects like insects.

How do you set up a thermocouple?

What are the materials used for thermocouples?

The most useful materials for thermocouples have high-temperature stability such as nickel and platinum, however, there are other materials such as copper, iridium, constantan, chromel, alumel, iron and rhodium which are commonly used in different types of thermocouples.

How many wires does a thermocouple have?

A thermocouple is always comprised of two wires (conductors) made from dissimilar metals. These two wires are joined to form a temperature measurement junction. Each of them made of a specific metal or metal alloy.

A thermocouple is a simple and fairly inexpensive temperature sensor used to measure temperature. Due to its versatility, it is used in a vast array of applications from food processing to aircraft engines.

There are mainly eight different types of thermocouple temperature sensors: B, E, J, N, K, R, T, and S type. Each type has its own unique properties and capabilities making it suitable for a specific set of applications and industries. 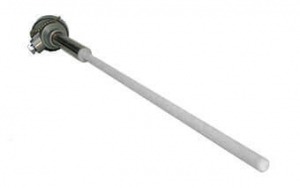 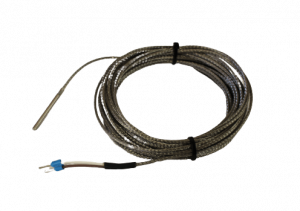 If you want to order a thermocouple or you are unsure exactly what you need, get in touch and we can help you.

Infographic – What is a thermocouple and how does it work?

What Is A Thermistor And What Does It Do?

What Is RTD Sensor And How Does It Work?
Scroll to top

This site uses cookies. By continuing to browse the site, you are agreeing to our use of cookies.

We may request cookies to be set on your device. We use cookies to let us know when you visit our websites, how you interact with us, to enrich your user experience, and to customize your relationship with our website.

Click on the different category headings to find out more. You can also change some of your preferences. Note that blocking some types of cookies may impact your experience on our websites and the services we are able to offer.

These cookies are strictly necessary to provide you with services available through our website and to use some of its features.

Because these cookies are strictly necessary to deliver the website, refusing them will have impact how our site functions. You always can block or delete cookies by changing your browser settings and force blocking all cookies on this website. But this will always prompt you to accept/refuse cookies when revisiting our site.

We fully respect if you want to refuse cookies but to avoid asking you again and again kindly allow us to store a cookie for that. You are free to opt out any time or opt in for other cookies to get a better experience. If you refuse cookies we will remove all set cookies in our domain.

We provide you with a list of stored cookies on your computer in our domain so you can check what we stored. Due to security reasons we are not able to show or modify cookies from other domains. You can check these in your browser security settings.

We also use different external services like Google Webfonts, Google Maps, and external Video providers. Since these providers may collect personal data like your IP address we allow you to block them here. Please be aware that this might heavily reduce the functionality and appearance of our site. Changes will take effect once you reload the page.